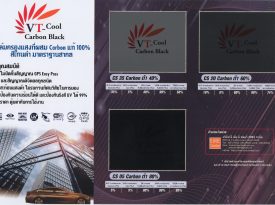 VT-Cool – One Way Metalized Series (Affordably priced)
This affordable metalized film helps reduce heat and has low light reflection. Suitable for buildings that sit under the sun throughout the day. VT-Cool – Nano Ceramic Technology Series
This is a partial safety tinting film with 2.2 mm thickness. It help reduce heat superbly, even with no metal parts in the film. It has low light reflection which, in return, yields a much better vision. This series has up to 99% UV protection and up to 96% infrared protection. This film won’t interfere with the digital reception. Plus it also offers nice tinting tones that will last for a long time.